Sev talks about SAFER at Paranal

Sev talks about SAFER at Paranal

Just before we left Sev (RAL Space) the project manager of SAFER gave a talk to people at the Paranal Observatory. There were some projector problems in the beginning so the recording starts rather suddenly. Also once again sorry about the quality the light levels at ESO have to be kept low and we were not equipped for low light recording. Anyway enjoy the talk:

It’s been an intense but exciting few days at the RCC with operations running from early morning to late at night. The team are based in the CATAPULT centre and are making full use of the large video wall to display data from the sensors and 3D planning tools. Each day begins with a review of the previous sol’s uplinked data in order to allow the team to select new targets or trajectories for further investigation. For the early phases we were joined by senior observers from missions such as ExoMars. The team must quickly check Bridget’s current position given that it must be removed from the site overnight. They then consider good observation points for instruments and safe paths for navigation. A key goal for SAFER was the desire to use information from the various sensors in an integrated way. This allows individual instruments teams to see where their data originated from and allows scientists to understand the terrain in context. Once a plan has been prepared it is dispatched to the LCC team who then forward it onto the rover. Plans can take anywhere from 15 mins to several hours to execute. Whilst awaiting the data to be uplinked from the Rover, the team start to prepare for the next plan and explore what if scenarios in case of any issues. As we enter our last day it’s clear that this has been a fantastic learning experience for all involved. As our lead scientist Susanne noted we had our own “flight moment” on Thursday when the WISDOM team got to see their data displayed in 3D for the first time on Thursday evening. Looking forward to the next field trial! RCC Over and out. 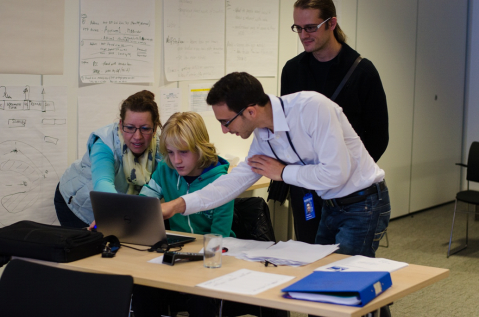 During the past few days the preparations for the actual trial, which started a week ago, have proceeded well. A number of sites in the area in the Atacama desert where part of the team is located, have been visited. Based on guidance provided by Chilean geologist Prof. Guillermo Chong the team’s geologist Derek Pullan of the University of Leicester has been exploring the area looking for sites which are analogous to those on which the instruments, which used in the trial, would be deployed on Mars. Based on this information a consensus was reached within the local team on the choice of the site, which they called “SAFER valley”. On Sunday night a digital elevation map, acquired in the field by a UAV, was sent to the Remote Control Centre (RCC), simulating orbital imagery of the rover’s surrounding terrain on Mars. For this campaign the RCC is located at the Catapult Facility in Harwell, UK.

The instruments used in this test support the search for good locations for collecting subsurface samples on Mars which may contain signs of past or present life.
The PanCam (Panoramic Camera) instrument has been designed to search for textural information on rocks and other information that will help in revealing the geological characteristics of the Martian environment.
This instrument will provide stereo and 3D imagery of the terrain around the Rover. In particular, the Panoramic Camera will be used:
• To help locate the landing site and Rover position with respect to local geographical references;
• To provide the geological context of the sites explored by the Rover;
• To support the selection of the best sites to carry out exobiology studies;
• To study properties of the atmosphere and of other variable phenomena.
PanCam will also support the scientific measurements of other Rover instruments. It will capture high-resolution images of locations that are difficult to access, such as craters or rock walls. On the ESA rover of the 2018 ExoMars mission PanCam will monitor the sample from the drill before it is ingested and crushed inside the Rover, where the Analytical Laboratory instruments will perform a detailed chemical, physical, and spectral analysis. For the field trial a PanCam emulator, called AUPE-2, is used, which was developed by Aberystwyth University.
Vision Processing in 3D of PanCam data is an essential component of mission planning and scientific data analysis. Standard ground vision processing products will be digital terrain maps, panoramas, and virtual views of the environment. A vision ground processing workflow has been performed by the PanCam 3D Vision Team, under coordination of Joanneum Research, Austria.

The CLUPI (Close-up Imager) instrument, developed by the Space Exploration Institute in Switzerland, is a robotic substitute to one of the most useful instruments of the geologist field: the hand lens. Imaging of rocks surfaces, soils and wind drift deposits at high resolution is crucial for understanding the geological context of any site where a rover may be active on Mars. CLUPI is optimized for a scientific objective: the characterization of rock outcrops from 10 cm to infinity, and the observation of the cored sample.
The WISDOM ground penetrating radar developed by the LATMOS research lab of the Centre National de la Recherche Scientifique, France, will provide a detailed view of the shallow subsurface structure of Mars by sounding the upper layers of its crust. Unlike traditional imaging systems or spectrometers, which are limited to studying the visible surface, this radar will access what lies beneath.
WISDOM will provide the three-dimensional geological context of the terrain covered by the Rover. This additional perspective is vital for a better understanding of the planet’s evolution, and the impact of its changing geology and climate on past and present habitability.
WISDOM’s main science objectives are:
• To investigate the three-dimensional geology and geological evolution of the landing site, and provide information on the general physical characteristics of local rocks, the rock layering and structure;
• To characterise the electromagnetic properties of Martian soil in order to map the scale of diversity in the shallow subsurface; and
• To observe the local distribution of well-compacted, sedimentary deposits that may have been associated with a water-rich environment in the past.

The roving vehicle, on which the prototype instruments have been installed on tuesday morning is provided by Astrium Stevenage, UK, and is called Bridget. The software which controls the activities of the rover and payloads onboard and a counterpart for the remote definition of these activities for this trial has been developed by SCISYS, Bristol, UK.

Although this test is not part of the ExoMars mission development and the industrial team differs from the one building the flight rover, in this field trial a procedure for operating the ExoMars rover mission will be verified and possibly optimized in practice. On Monday evening, before the instrumented Bridget rover was in the field a set of PanCam images was sent to the RCC. Based on this data combined with the digital elevation map received previously the remote control team had to make a first decision about the path to be executed by the rover on Tuesday. On Tuesday morning the Local Control Centre was set up, the rover was deployed in the field and the instruments were installed on the rover, while the RCC uploaded the desired path and the first program of data acquisition activities. Some debugging and manual interventions were needed during this initial phase. Nevertheless, after a long working day in the desert until sunset, the collected instrument data were set to the RCC.

For some things you need to be out in the field. The following event probably wouldn’t have happened in a lab environment. A flat rock which was easily traversable by Bridget suddenly flipped when Bridget’s wheel went over it close to one side. This greatly increased the height of the rock. Luckily Bridget had enough ground clearance to safely proceed but this scenario is definitely something to think about when driving over similar rock on Mars.

This rock initially had a low profile and was identified as one safe to go over
credit: Elie Allouis ‎(Astrium)

To calibrate WISDOM a highly reflective surface is put under it (the golden foil) to get the maximum reflection. After the calibration WISDOM can see up to 10 meters underground depending on the soil type.

Pancam on top, WISDOM are the two gold antennas pointing down and clupi is the black camera on the right
credit: Elie Allouis ‎(Astrium)

We were lucky with the timing of our trial as Guillermo Chong gave a presentation on Chile yesterday at the Paranal Observatory and the SAFER team was invited. Even better news is that we recorder the presentation and uploaded it to youtube so you can watch it too! The recording quality is not great but the presentation is really interesting:

Mark has been a key part of the Advance Team but now he is headed back to the UK to join the RCC team. The schedule of the Advance Team has been very busy generally out in the field from 8am to 6pm but just before Mark left we managed to record a short interview in the eerie gloom of the Paranal Hotel (the lights are kept low at night to minimalize light pollution).

Mark talks about the site selection project and Scisys’s role in the SAFER project.

The RCC team is ready to take control of rover operations. They have received aerial images which are representative of Martian orbiter images and the rover position within the aerial image. The RCC team will start looking for science targets and plan paths waiting for the first PanCam and Navcam images to arrive.

It will be a busy week in the Catapult centre at Harwell Oxford in the UK and out in the field near Paranal in Chile.

The Advance team discussing which sites to use for the trial (image credit: Mark Woods – Scisys)

As mentioned earlier the part of the team in the UK will send commands to the rover just like they would do in a Mars mission. This means they won’t have any information of the site before “landing”. However the team in Chile need to make decisions to pick an interesting, challenging and scientifically accurate site which is also easily accessible and works with the other logistics aspects. This is no easy task, and discussion carries on well after dinner. When they started covering up the tables the team decided to continue the discussion elsewhere. Site surveys will continue tomorrow.